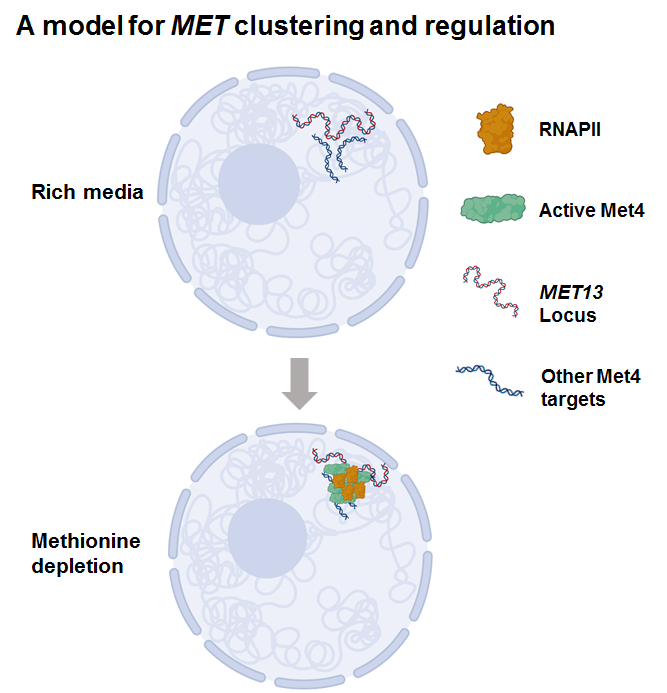 Beyond the packaging of genome into nucleosomes, chromosomes are further organized into high-order structures in the 3D nuclear space. In recent years, imaging and 3C-based measurements revealed intricate chromosome folding patterns with extensive long-distance chromosomal interactions. There are a few proposed models of how these interactions may regulate gene expression, including enhancer-promoter looping, multi-gene clusters, and transcription factory. However, we have limited understanding of the molecular basis for these phenomena. The long-term goal here is to understand the formation mechanism of these high-order structures and elucidate their functions in gene regulation. Budding yeast was traditionally considered not to be a good model of long-distance gene regulation. However, my lab and several others recently found evidence that 3D conformation contribute to gene regulation in yeast. More specifically, we found long-distance gene regulation with two different genetic constructs. In the first case, we showed that two allelic GAL1 reporters (one with wild-type GAL1 promoter and the other mutated) physically interact upon galactose induction, and the wild-type promoter facilitates the firing of the mutant promoter. In the second case, we found that the MET3pr-GFP reporter clusters with other co-regulated MET genes, and the clustering is correlated with higher transcriptional activity. We are currently investigating the molecular mechanism of the hyper-activity of these MET clusters. Overall, these novel findings opened the opportunity of using the powerful yeast genetics to investigate the 3D genome function.